The 11 most threatened modern sites

Prompted by the recent demolition of Geller I, Docomomo US has selected 11 of of the most significant examples of Modern architecture from across the country that are at risk of being lost. Terrace Plaza needs a developer with a creative vision

When the Terrace Plaza Hotel was originally built, designed by Natalie de Blois of Skidmore, Owings and Merrill, it was a visionary project - one of the first International Style hotels in the United States. Now, the long vacant hotel is up for auction. Is there a preservation-minded developer out there who can recapture some of the vision of its original designers? Dedicated in 1972, plans are underway to celebrate the 50th anniversary of Paul Rudolph’s design for the First Church in Boston. Are you interested in helping to preserve and share the significant heritage of modernism in New England? The New England chapter of Docomomo US is reaching out to those who might want to become involved in extending the group’s reach throughout the region and in participating in activities and leadership. As part of its 2022 advocacy theme, Docomomo US is launching Mallitecture & Memories, a crowdsourcing campaign to document midcentury shopping malls. The Stephen F. Austin School (SFA), constructed under the Public Works Administration building program in 1935, enrolled its first Mexican-American student in 1946, and was one of nine original sites for the League of United Latin American Citizens (LULAC)-backed “Little School of the 400.” The now-vacant building is under threat of development for much needed housing. An excerpt from the book Reglazing Modernism - Intervention Strategies for 20th Century Icons, by Angel Ayón, Uta Pottgiesser and Nathaniel Richards, which was awarded the 2021 Lee Nelson Book Award from the Association for Preservation Technology International (APT). Docomomo US welcomes new board members for 2022

We are pleased to announce Jesús (Chuy) Barba Bonilla and Rachel Leibowitz will join the Docomomo US Board of Directors. 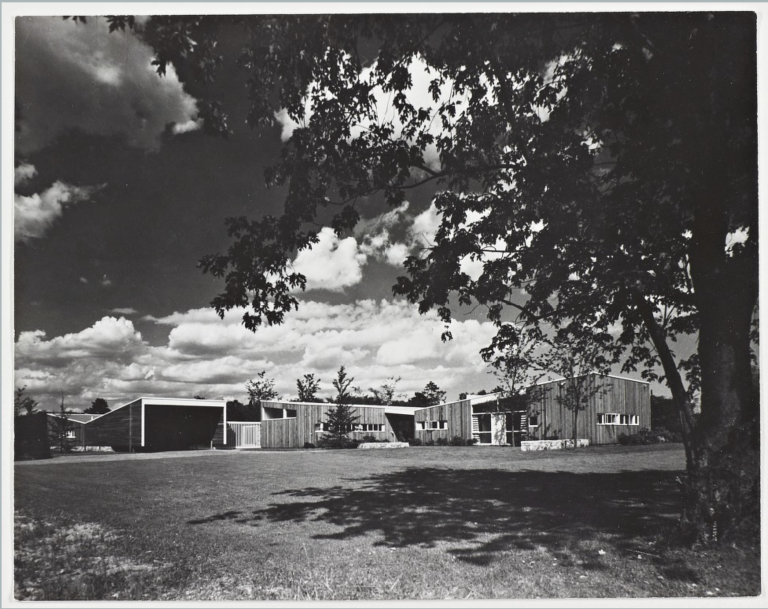 Marcel Breuer's first binuclear house, Geller I in Lawrence, New York has been demolished this week in the dead of night. Geller I is largely considered the project that propelled Breuer to private practice in New York and prompted the Museum of Modern Art to commission Breuer to design an exhibition house in the museum’s courtyard entitled The House in the Museum Garden in 1949. The future of the Thompson Center is looking brighter

On December 15 the preservation world received some unexpected good news about the long-threatened James R. Thompson Center: Governor Pritzker had chosen a developer whose proposal for the site includes retaining the structure as a mixed-use property with office, retail and hotel space. There is still a long road ahead but this is a huge step in the right direction. How to save 165 tons of precast concrete panels

Architect Fred Guirey and his associates received the commission in 1961 to be the architect for the Arizona Public Service (APS) administrative building. Over the next 60 years, several panels over the walkway developed hairline cracks, making them a safety hazard. Alison King of Modern Phoenix and the firm 180 Degrees Design + Build stepped in to save them from the landfill. Two significant modern homes in the Tucson, AZ region have recently received official recognition as historic landmarks. Due to an increase in population growth in the mid twentieth 20th century, Tucson saw a correlated rise in construction during that time. Now, thanks to organizations such as Tucson Preservation Foundation, they are beginning to receive the attention and recognition that they deserve. In 2021, both the Beck House, designed by John H. Beck, and Viewpoint/Johnson House, designed by Judith Chafee, were designated as local landmarks. As the population shift stretched out into the suburbs, it transformed the idea of commerce. Shopping malls became a staple of American society after the Second World War, providing convenient access to domestic needs while offering social and cultural components. Early malls were small, open-air groupings of commercial enterprises with a small parking lot out front. But the idea rapidly expanded with the creation of the fully enclosed malls. This new take on suburban commercial structures began the trend for these sprawling structures that became ubiquitous within our built fabric and only continued to morph and change over the course of the 20th century. Today, shopping malls are in a critical point of flux. Docomomo US welcomes cf3 as a Friend Organization

Docomomo US is pleased to welcome cf3 (Cincinnati Form Follows Function) as an official Friend Organization. 2021 has been a long year, with preservation challenges to match. Docomomo US continues to put our resources and platform to positive use by engaging in intensive, multi-year efforts to save some of our country’s most significant modern heritage. Docomomo US is participating in the Section 106 process for the Smithsonian Institutions's National Air and Space Museum (NASM) Restaurant Addition Replacement . This is a separate process than that for museum itself, for which work is currently underway. Holiday cheer in the air, and a modern book in your hand. While searching for books worthy of this year's list, we encountered a pleasant surprise - an exciting number of publications focused on the contributions of female designers - we love to see it. We also have a few more travel & leisure themed titles to round out our 2021 annual theme, and here's a hint: pre-order Alexandra Lange's book on shopping malls if you want to be ready for next year's theme. Gift a book to the modernist in your life or add them to your own "to-read" list for 2022!