In between Rivers: Pittsburgh's Modern Milieu

View of the skyline and City of Pittsburgh from the Mount Washington Overlook, 1969.

In Between Rivers: Pittsburgh's Modern Milieu is part of the Docomomo US Regional Spotlight on Modernism Series, which was launched to help you explore modern places throughout the country without leaving your home.

“This is the only city in America with an entrance” declared Paul Goldberger in his January 1988 New York Times article about the makings of Pittsburgh’s skyline and the experience of approaching it by way of the 1960-built Fort Pitt Tunnel and subsequent namesake bridge.  While not explicitly acknowledging 20th-century modernism, the “cinematic” sequence and its visual ingredients which he deeply praises - and that there is a sequence at all - is largely a direct result of the era. A legacy of modern mid and high rises that stand not in isolation, but continue to connect (aesthetically and conceptually in varying degrees) to the surviving structural fabric surrounding, and now supporting them. Architecturally speaking and limited to Downtown that may be so, but it requires deeper consideration to explore such relationships in the cultural-social fabric layers throughout the sprawling region.

Indeed, with no visual preview from the other side of Mount Washington (once ‘Coal Hill’) of what lies ahead, a motorist coming from the International Airport, having been compressed in the tunnel for almost 4,000 feet emerges, immediately crossing the Monongahela River to connect to the City – and there, a singular skyline suddenly presents itself. For some of us that provides a ‘you’re home’ feel. But, this is not home for most - albeit a fine home for some - it’s downtown Pittsburgh, and many miles (and styles) lie ahead. Renaissance I, one of the most celebrated modernist renewals beginning precisely at the convergence of three rivers - rivers that flow to and from many towns, communities and cultural centers with complex pasts and desires, that fit not on a postcard.  Indeed, the results and ripple effects of Pittsburgh’s modern era, positive and challenging at once, surface as textured reflections – some enchanting and others stark – prompting vital responses.

Pittsburghers have an inclination to share casual navigations based on both monumental and vernacular places no longer there (take a right where the old ____ used to be); a modest refusal of change, the holding of a memory or an awkwardly expressed wistful sentiment and awareness - if passive - toward our built heritage and the people and activities contained within.

In keeping with the markedly relevant and urgent ongoing Docomomo US themes - the Diversity of Modernism and the '70s turn 50 - we welcome you to journey beyond the Point with us… after you’ve paused to take in its beauty.

View of the skyline and City of Pittsburgh from the Mount Washington Overlook, 1969.

Read the next article in the Regional Spotlight Series, Pittsburgh's Modern Milieu Part Two: Walter L. Roberts, Black Modern Architect in Pittsburgh, or continue below to hear more about the other articles in this series and the work of the Pittsburgh Modern Committee.

Martin Aurand, former Architecture Librarian and Archivist at Carnegie Mellon University, offers a glimpse into the professional career and Pittsburgh-rooted portfolio of Walter L. Roberts, a multitalented, unsung architect of the region who made a diverse, modernist mark including with Westinghouse Electric, community housing and facilities, industrial design firms and more. Read more.

Through the lens of Mary Barensfeld, AIA, ASLA a contemporary, award-winning landscape architect-designer, we explore a 1974 project by Dan Kiley, painstakingly crafted in tandem with architect Edward Larrabee Barnes, enhancing the site of one of Pittsburgh’s most epic cultural institutions in the Carnegie legacy, and arguably one of the most successful modernist additions in a U.S. art museum. Read more.

Paulo Nzambi, a local leader in education at the Imani Christian Academy in the East Hills of Pittsburgh with a keen eye for Brutalism shares a visionary, preservation-minded love poem of the open-plan structure that welcomes and inspires his students from low-income communities - designed with a groundbreaking concept in 1972 by Tasso Katselas, Pittsburgh’s most prolific modern architect, in his signature combination of brick and concrete. Read more.

Rami el Samahy and Chris Grimley, principals at Boston-based architectural, environmental, and graphic design firm OverUnder, and curator-authors of Imagining the Modern: Architecture and Urbanism of the Pittsburgh Renaissance reflect on Troy West, an architect with a social approach that “elevated the voices of those often ignored during the Renaissance.” Read more.

Eric Lidji, Director of the Rauh Jewish History Program & Archives at the Heinz History Center of Pittsburgh, takes us on a visit to the Betty and Irving Abrams home designed in 1979-82 by the late Robert Venturi and his partner Denise Scott Brown with John Rauch – and explores the broader trends of Jewish patronage for modern architecture along the neighborhood’s infamous Woodland Road, and throughout the city. Recently a contentious local preservation issue gaining international attention, the Abrams House new owner wanted the dwelling dismantled and removed from their property – the preservation community reacted in disagreement, noting the grave loss of an important postmodern design in a particular context. Read more.

Since 2017, the Pittsburgh Modern Committee (a working committee of the nonprofit Preservation Pittsburgh) has been building a network and program to recognize, contemplate, and protect modern and postmodern architecture, design and public art in our region. We began with sharing ways to see mid- and late-20th century modern built heritage through walking tours and conversation, and plan to continue this educational content in every way we can.

Please peruse our new website and continue to check back as it develops. With special thanks to Keith Knueven, Founder and Creative Director of Keith&Co of Pittsburgh/Los Angeles for his collaborative design vision and support of our endeavor. 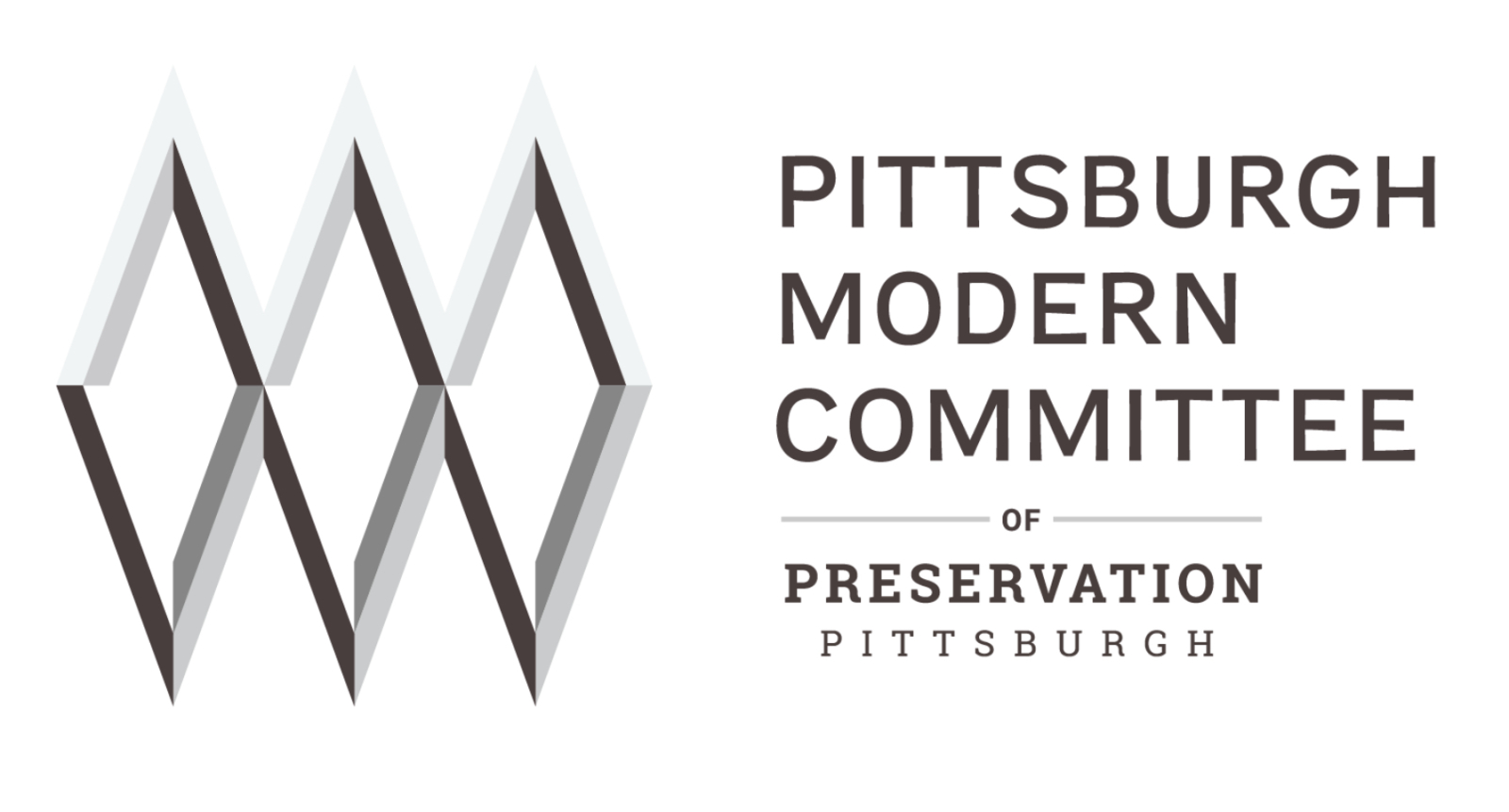 We are pleased to announce the launch of Modern Pittsburgh Prints, a collaboration between the Pittsburgh Modern Committee and illustrator Shane Henderson. Pittsburgh Modern Prints is an ongoing series celebrating sites of 20th century modern architecture and design.

Each illustration in this series is screenprinted with opaque ink on acid-free, FSC and Green Seal certified, 50% PCW recycled, 18pt Mohawk Loop Antique Vellum white paper by local Pittsburgh print shop, 542 Prints, and comes with a commemorative card detailing the history of each structure.

Choose your limited edition, hand-pulled screenprint and support the work of this local artist, the advocacy and programming efforts of the Pittsburgh Modern Committee of Preservation Pittsburgh (and the United States Postal Service as shipper)!

The first four compositions in the series depict extant, innovative projects representative of the mid-20th century ‘Renaissance I’ in Pittsburgh and its influence:

A Bridge – one of hundreds in Pittsburgh that connect us – this one serving traffic and pedestrians and presenting a view to the Golden Triangle from both modes.

A Plaza – a modernist marvel replete with patterns, features and arrangements originally enjoyed by ALCOA executives and downtown citizens alike, and fully restored in 2014.

A High-rise – comprised of steel and glass, quintessential symbols of Pittsburgh industry, and situated within a National Historic District.

And a Tunnel – through one of the myriad surrounding hills that provide Pittsburgh it’s unique terrain and which is responsible for the breathtaking “entrance” you may have experienced, or one day will, if coming from the Pittsburgh International Airport - as visitors for the Society of Architectural Historians Annual International Conference will in April 2022.

We hope that this series, along with new resources, inspire you to notice that modern matters - in many ways - in Pittsburgh. In a region notoriously tricky to navigate, there’s always more than one way to get there. Read on and reach out.

The United Steelworkers Building. 1963, Curtis & Davis. Architects Curtis & Davis incorporated several varieties of steel, concrete and glass into a 13-story structure for IBM in 1963, with a distinct diamond-pattern truss developed by local firm Peter Muller-Munk Associates.  A contributing structure within the Pittsburgh Renaissance Historic District on the National Register, and noteworthy contribution by the Equitable Life Assurance Society to the project, it is captured here in a vibrant blue ink referencing IBM’s classic logo palette.

Mellon Square. 1955, Simonds & Simonds and Mitchell & Ritchey. A full city block of vibrant landscape surrounded by modern skyscrapers opened in 1955 to the delight of Downtown Pittsburgh denizens.  The striking yet practical plaza design by Simonds & Simonds and Mitchell & Ritchey included signature terrazzo pavers, sculptural fountains, 6 levels of parking beneath and street level storefronts.  Fully restored in 2014 and soon a National Landmark, this ‘emerald oasis’ is captured in the hue of the Mellon family legacy and bank. The restoration project team received a Docomomo US Modernism in America Award in 2016.

A contemporary view of Mellon Square from the Smithfield Street side.

The Portal Bridge. 1961-1963, Charles and Edward Stotz architects with consultant Gordon Bunshaft of SOM et al. Presented with the challenge of integrating a pedestrian connection between Point State Park and Downtown, beneath an 8-lane highway-interchange, Pittsburgh architects the Stotz brothers responded with an elongated arch and walkway. Simple, soft, and elegant to the eye, but involving complex engineering and crafted of reinforced concrete, the 1963 vaulted portal invites an open view toward Gateway Center.

A view of the Portal Bridge at night, looking toward Downtown Pittsburgh.

Brittany Reilly serves as the Chair of the Pittsburgh Modern Committee, which she initiated in 2017 upon joining the Board of Directors of Preservation Pittsburgh. She is the Executive Director of the Irving and Aaronel deRoy Gruber Foundation, Pittsburgh.

In Between Rivers: Pittsburgh's Modern Milieu is part of the Docomomo US Regional Spotlight on Modernism Series, which was launched to help you explore modern places throughout the country without leaving your home. Previous spotlights include Chicago, Mississippi, Midland, Michigan, Houston, Las Vegas, Colorado, and Kansas. Have a region you'd like to see highlighted? Submit an article.

If you are enjoying this series, consider supporting Docomomo US as a member or make a donation so we can continue to bring you quality content and programming focused on modernism.