Making Houston Modern is part of the Docomomo US Regional Spotlight on Modernism Series, which was launched to help you explore modern places throughout the country without leaving your home.

Complex, controversial, and prolific, Howard Barnstone was a central figure in the world of twentieth-century modern architecture. Recognized as Houston’s foremost modern architect in the 1950s, Barnstone came to prominence for his designs with partner Preston M. Bolton, which transposed the rigorous and austere architectural practices of Mies van der Rohe to the hot, steamy coastal plain of Texas. Barnstone was a man of contradictions—charming and witty but also self-centered, caustic and abusive—who shaped new settings that were imbued, at once, with spatial calm and emotional intensity.

Making Houston Modern explores the provocative architect’s life and work, not only through the lens of his architectural practice but also by delving into his personal life, class identity, and connections to the artists, critics, collectors, and museum directors who forged Houston’s distinctive culture in the postwar era. 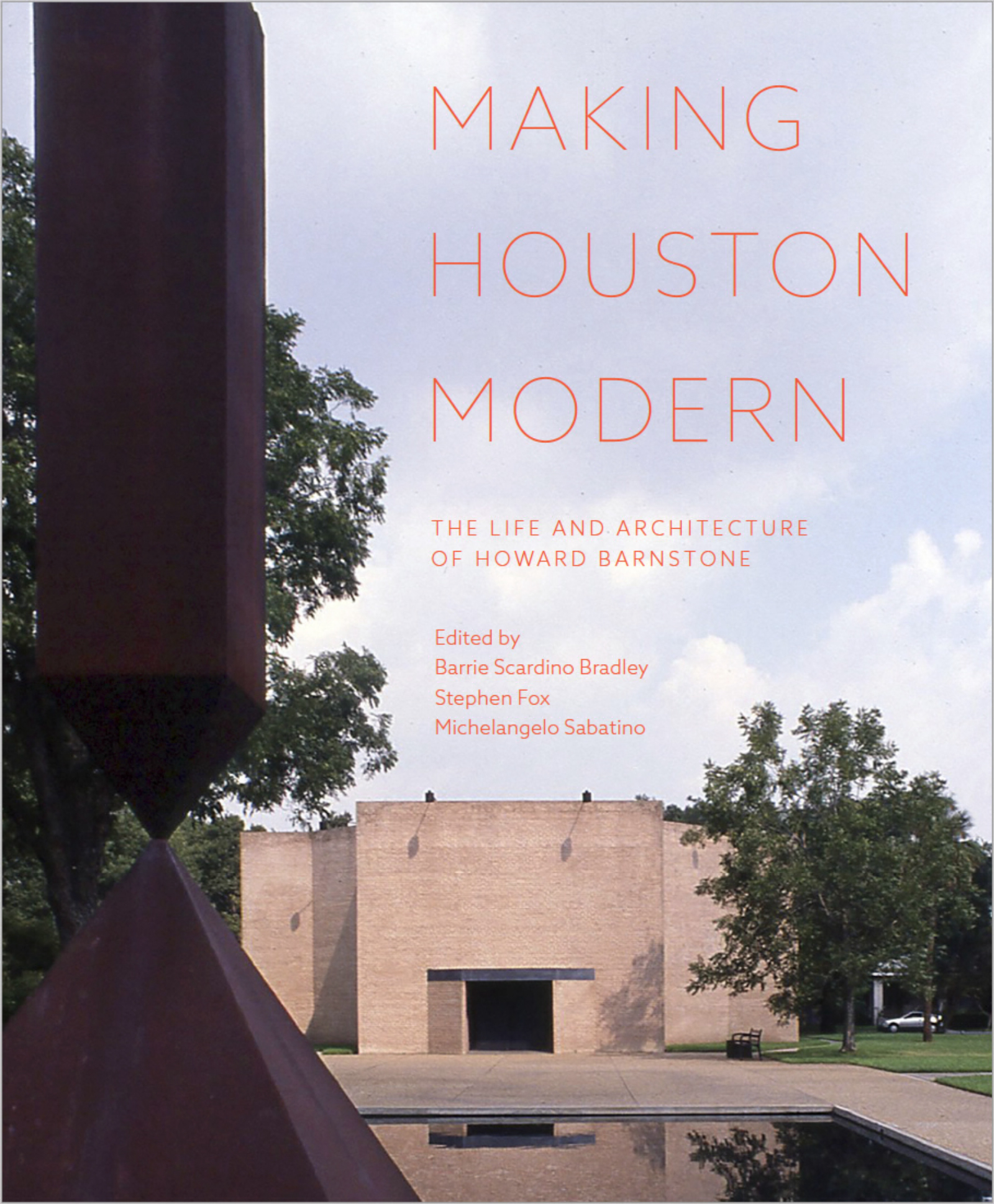 Making Houston Modern Part One
Why Howard Barnstone Why?

By Stephen Fox and Michelangelo Sabatino

Howard Barnstone practiced architecture in Houston from 1948 until his death in 1987, an exceptionally fertile period in twentieth-century architecture. Barnstone belonged to a generation of American architects born between 1916 and 1929 whose diversity intensifies the question why?... Barnstone valued architectural dexterity. His buildings demonstrated consistency through proportions and details rather than through identification with a set of design principles or methods.

Among the well-known Texas architects who practiced during the postwar period, Barnstone stood out for his rejection of both modernist rationalism and Texas regionalism. Barnstone delighted in defining himself against the dearly held convictions of others. He found support for this propensity in two figures he especially admired: his major client, the Houston businessman and art collector John de Menil (1905–1973), and John de Menil’s other architect, Philip Johnson (1906–2005). John de Menil’s defiance of Houston’s social conventions and Philip Johnson’s skepticism about declarations of faith in architectural movements resonated with Barnstone because both stances seemed to call for individual action rather than acquiescence in group thinking....

Houston, where Barnstone arrived as a Yale architecture graduate and newly licensed architect in 1948, was a city of outsiders and newcomers. Since the 1920s, Houston had expanded in population and territory at what seemed like exponential rates. The US census of 1950 revealed that Houston, which in 1920 had been the third-largest city in Texas (and seventeenth largest in the South), had achieved what once would have seemed impossible: it had surpassed New Orleans to become the largest city in the South.(1) When Barnstone arrived, Houston still thought of itself as a southern city, although as the national news media “discovered” Houston and Texas in the postwar period, they played up its cowboy identity. As the historian Andrew C. Baker argues, this southwestern identity enabled Texans to dissociate their state from the extreme racism that the rise of the civil rights movement provoked in other southern states, while allowing them to hold onto the symbols of white male privilege, a defense of law-and-order policies, and aggressive assertions of individuality.(2) Along with this revisionist identity, Houstonians embraced unimpeded suburban expansion, the construction of freeways, and the proliferation of central air-conditioning as markers of midcentury modernization.(3) Houston thrived during the Second World War as the Defense Plant Corporation, a division of the national government’s Reconstruction Finance Corporation, added a layer to the city’s oil and natural gas economy by subsidizing construction of a petrochemical refining infrastructure and converting the Houston Ship Channel into an international center of petroleum processing.(4)

Stephen Fox is an architectural historian and a fellow of the Anchorage Foundation of Texas.

Michelangelo Sabatino, an architect, preservationist, and historian, is a professor (and former dean) at Illinois Institute of Illinois and a member of the Board of Directors of Docomomo US.  Throughout his career Sabatino has focused new light on larger patterns of design discourse and production during the nineteenth and twentieth centuries: his book Pride in Modesty: Modernist Architecture and the Vernacular Tradition in Italy (2011) was translated into Italian and won critical acclaim and multiple awards, including the Society of Architectural Historians’ Alice Davis Hitchcock Award. His recent books include Canada: Modern Architectures in History (with Rhodri Windsor Liscombe, 2016), Avant-Garde in the Cornfields: Architecture, Landscape, and Preservation in New Harmony (with Ben Nicholson, 2019), Making Houston Modern: The Life and Architecture of Howard Barnstone (with Barrie Scardino Bradley and Stephen Fox, 2020) and Modern in the Middle: Chicago Houses 1929–1975 (with Susan Benjamin, 2020).

Making Houston Modern is part of the Docomomo US Regional Spotlight on Modernism Series, which was launched to help you explore modern places throughout the country without leaving your home. Previous spotlights include Chicago, Mississippi, and Midland, Michigan. Have a region you'd like to see highlighted? Submit an article.

If you are enjoying this series, consider supporting Docomomo US as a member or make a donation so we can continue to bring you quality content and programming focused on modernism.

Thank you to Barrie Scardino Bradley, Michelangelo Sabatino, Stephen Fox, and the University of Texas Press for allowing us to share this excerpt.

Making Houston Modern: The Life and Architecture of Howard Barnstone is expected in August 2020 and is available for pre-order now.